The Biggest Harvest Yet in Our Small Garden 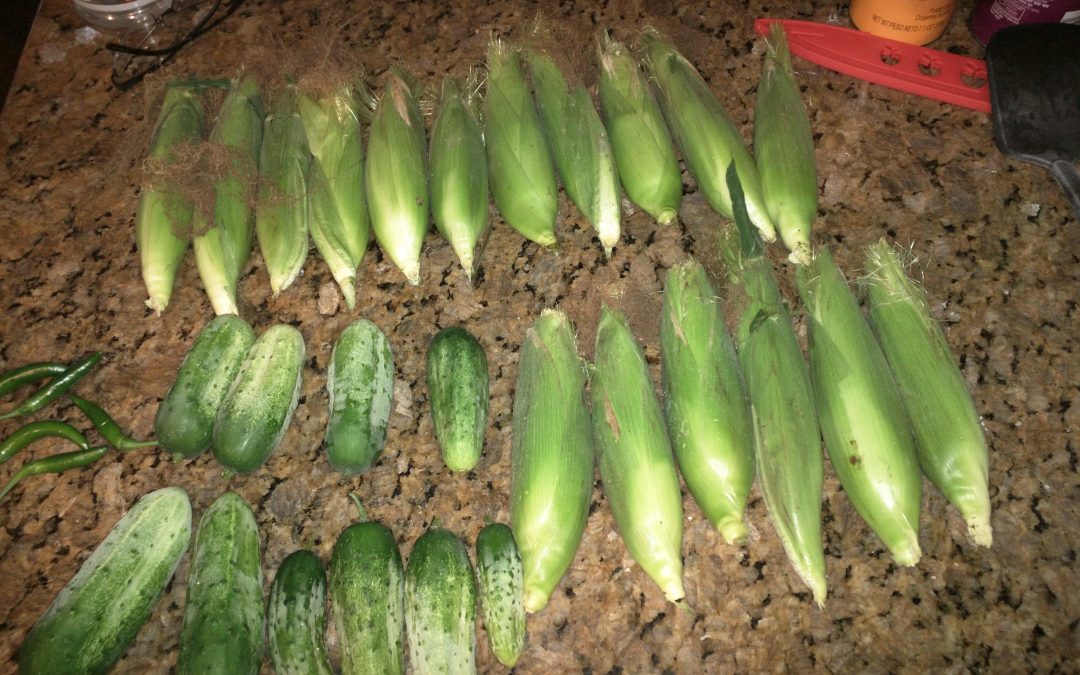 So today i awoke with some sever back pain and just couldn’t sleep anymore. I decided to get out of bed and hobble outside to check on everything and see about taking some of this corn down. Well i get outside and boy is it ever hot for 10 am, but i hobble down to the garden to get started.

Upon entering the garden and checking a few ears of corn i find out it’s probably been time to pull these small ears for a few days and i’m just not experienced enough to know. So i set about checking each ear to ensure the kernels are fully grown to the tip of the ear, making sure there is no signs of bad growth or disease in the ears. I ended up picking about seventeen ears of sweet corn in total, which make me and Angie proud because we grew it ourselves (with a bit of help from Val, Angie’s mom who started the seeds for us). I pulled most of the remaining plants and roots after harvesting the ears, the ones that weren’t firmly rooted into the ground that is. 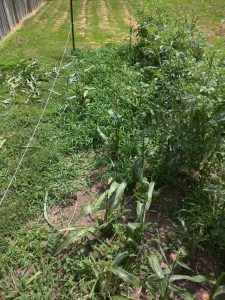 The over grown corn plot 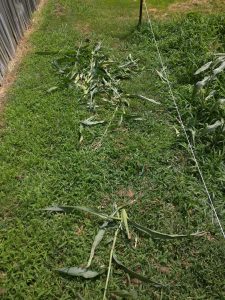 After finishing up with the corn and moving my way around that patch of shin high grass and corn stalks, i made my way over to the peppers. Now the jalapenos are in a sad shape right now and i’m still not sure what is going on with them but i believe they may be a loss at this point, though i am looking into ways of saving them yet. The serranos on the other hand seem to have some peppers that were just perfect and ready to be picked. I found out last night these little plants only get to 1′ – 1 1/2′ high and the peppers are small versions of the jalapeno beit a bit hotter. I ended up picking off five in total, as to what use they will serve, we have not figured that out yet. 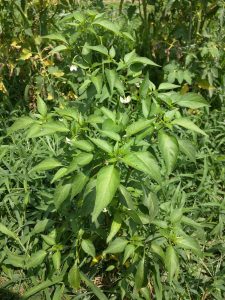 Serrano pepper plant doing well, some small fruits didn’t take it seems but some did and were ready to be harvested.

After the pepper plants comes the tomatoes, now these guys are not doing so well. Most of the cherry tomatoes have fruits on them and seem to be growing still, though it looks like the beefsteak plants is still struggling a bit to even keep flowers on the plant. Of course this means to harvesting of tomatoes today so i continue on to the cucumbers. 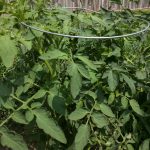 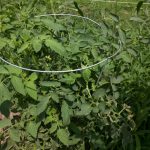 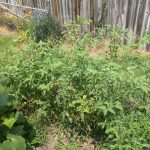 Now i’m not sure if it’s just me but this plant is by far my favorite, simply for the fact that it produces so much in such a short time, It grows like a weed, trying to take over whatever space it can get its itty bitty tendrils around, once it starts growing in a spot it just takes over. For this fact alone this is my favorite plant in the garden as of yet. I ended up only planting two plants for the cucumbers and it looks almost like a jungle growing up along the trellis. I searched the plants to make sure i didn’t need to clip it today and i found two fully formed cucumbers that were trying to hide away from me. 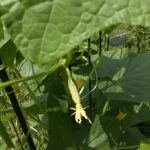 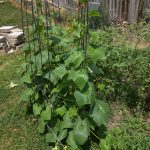 Traveling up and every which way it can grow

And finally after i finished the usual rounds, i checked upon the three onions i actually got to grow this year, of which each was doing fine, nice green tops still so not ready to pull up yet. While moving the vines for the watermelon to check on the onion, i seen the first fruit set today which made me pretty excited. It’s just a tiny, itty bitty fruit but it’s there and growing. 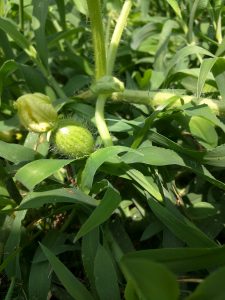 Check out this tiny little guy, hopefully it gets nice and sweet!

I can’t wait to see what this garden bring yet, and i know we plant to plant in the corn area once its all done, probably some cooler weather stuff that won’t rip nutrients from the tomatoes nearby. I hope we can get the rest started and going soon, but just seems like there isn’t enough hours in the day for gardening especially when working full-time as well.

And here’s the final haul for today, i think it was a nice gathering expedition, until tomorrow this is where we currently sit. 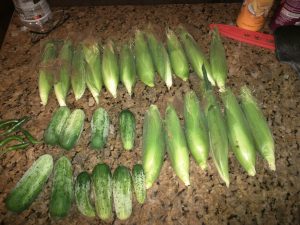