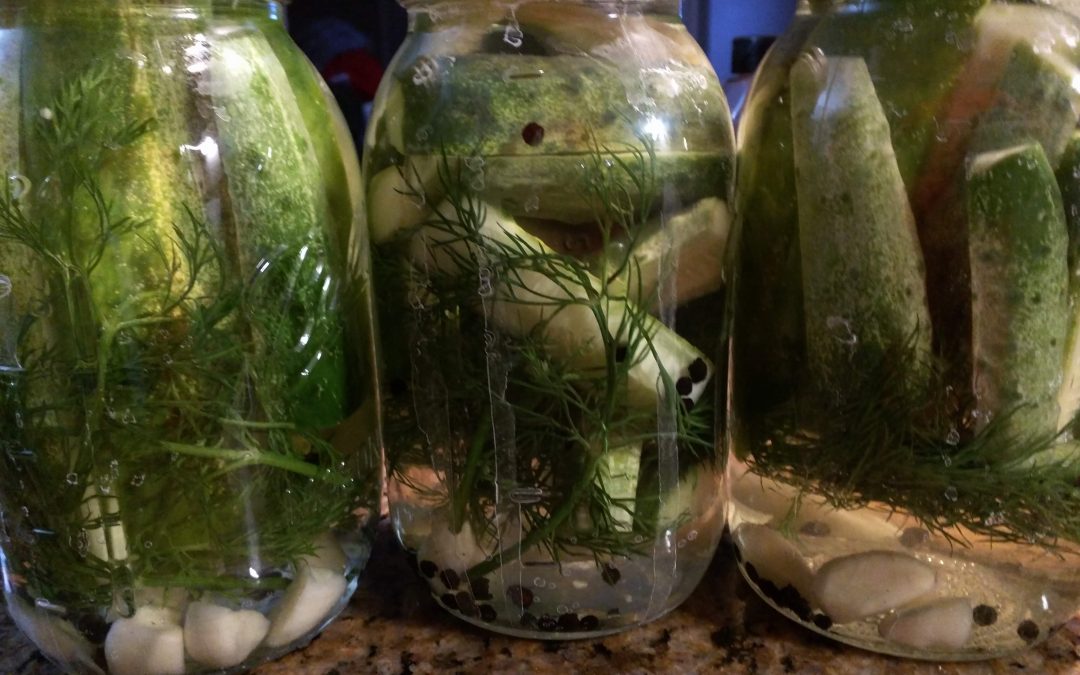 So after the harvest the other day i decided making some pickles for the first time would be quite cool as i love some fresh dill pickles but have never even thought about attempting to make them. I ran around town and finally found some dill at Fresh Thyme for relatively cheap. The only thing holding me back was lack of lids for the jars we had on hand and time due to working. So last night after work i hopped over to Walmart to grab some lids for the jars so when i got home i could start the pickle expedition.

We arrived at home and we had to just rest a bit after working all day. About 12 o’clock rolls around and i finally decided to get started on the pickles. I decided that a regular old fashion brine was in order and i didn’t want to add anything fancy (nor anything to add that is) so I used the normal pickling items: pickling salt, water, 5% vinegar, garlic, dill and some peppercorns. 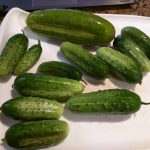 Cucumbers ready to be chopped up, they soaked in ice water for 24 hours 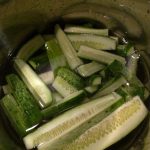 All cut up and ready to be stuffed into the jars 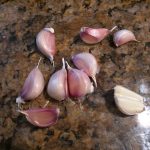 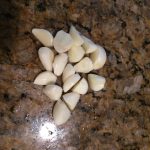 Garlic all cut and ready for jars 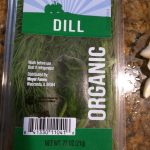 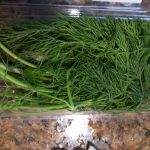 Fresh dill ready to be washed

I proceeded to get the brine ready so that i could just boil it away, let it cool and pour it in. I decided i wasn’t going to actually can these in a water bath as i don’t think they will even last more then a month in the fridge due to me and the friends that visit, that is if they end up tasting good! I ended up using a simple and easy recipe as follows:

I cut the cucumbers into spear slices to ensure i could get everything to fit in the jars, taking care to remove the blossom end so that the pickles wont get soft and also the stem end for a more uniform look. I know i also didn’t stuff them in as much as i could have, but i wanted to leave a little room for everything to move about a little bit. I also cut up some fresh garlic i received from Val and her awesome garden, and that along with the rinsed dill went into the jars. 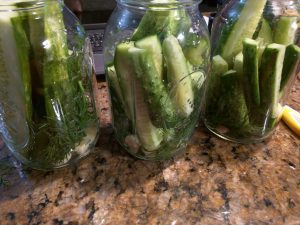 Jars all loaded and ready to be brine filled, looks and smells great!

Once the brine had boiled I let it cool for a good 10 minutes or so at least so that it wouldn’t explode my not-so-warm-slightly-cool jars. I proceeded to pour this brine mixture over the now loaded jars, and marvel at how easy this actually was. After the now hot glass had cooled off, i transferred the pickles from the counter to the fridge to await. I will have to wait at the very least three days to pop these bad boys open and test them out, i can hardly wait! 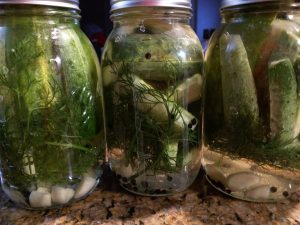 All brined and ready to go into the fridge!