The peppers and tomatoes are dying, I think? 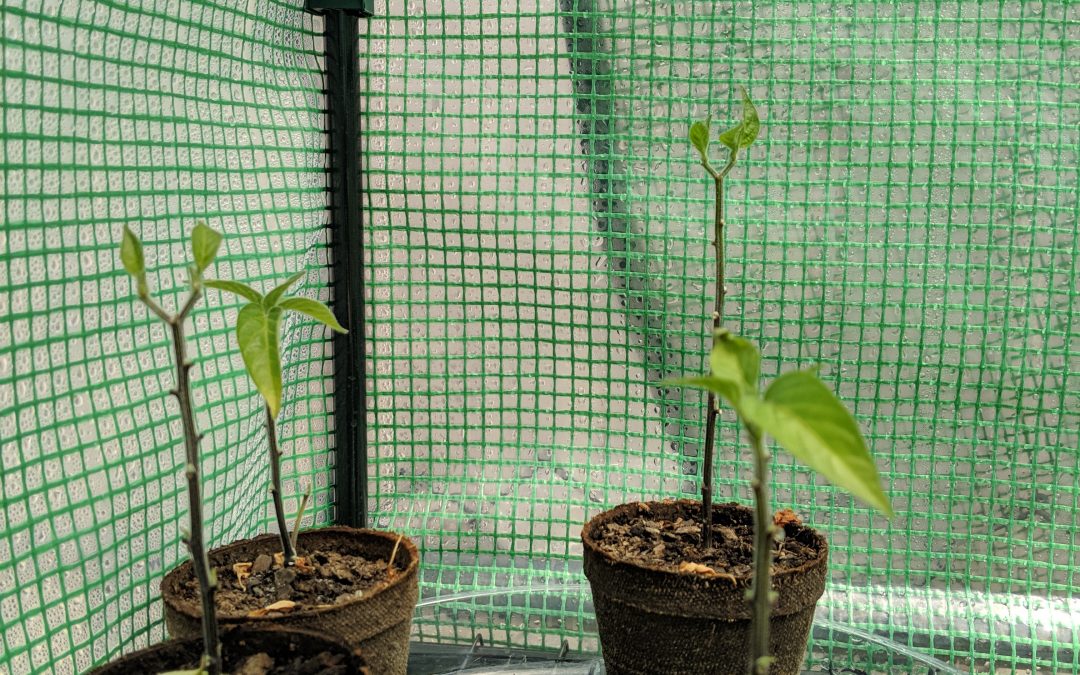 The peppers & tomatoes are dying! Well I can be a little dramatic sometimes when it comes to the plants and really any hobby mine. The peppers and tomatoes seem to be having it pretty rough lately. Compared to the rest of the bunch of vegetables anyways. They seem to have a issue of the leaves yellowing and falling off the plant. This is starting from the bottom of the plant and working to the top. Let’s take a look at this and see what we can do about this issue if anything.

How it all started with the peppers

This all seemed to start with the Serrano’s that I had planted back on March 6th. To be clear all the peppers were started at the same time and came up within days of each other. Nothing was really out of the norm for all of March. Only once April hit did I even start to notice any signs of what was to come.

It started as a very unnoticeable amount of yellow starting to creep up from the bottom of the plants. When I did finally notice this I attributed it to just loss of the initial seedling leaves. The Cotyledon as it’s properly known. Upon seeing and thinking this I left them be and only watered as necessary.

At this point the peppers had been in their 2″ pots for about a little over a month or so. I continued to monitor the progress every day and started getting concerned about possible LED light bleaching as the plants seemed to start to worsen as time continued to pass. I started to notice the color start to drain almost daily when I came to check on them.

A few days after the peppers started to get a little concerning. The tomatoes decided it might be fun to join in as well. As you can surmise this didn’t amuse me quite as much.

A note, the tomatoes were started on March 16th and were also transplanted into 2″ pots once sprouted and rooted. Some we’re a lot faster to germinate then others. We decided on three varieties of tomatoes: Super Beefsteak, Wisconsin 55 and some random cherry tomatoes. We had a fair amount of seeds from last year.

I noticed the veining in the leaves start to change color, getting a darker color. Also was starting to see a bit of leaf curl but not a lot more then is normal. I should of paid more attention to the plants

The plants were suffering but I didn’t realize!

I noticed into this last week in April and the first week of May both the peppers and tomatoes were still not fairing well. Even with the water and plenty of sunlight. So I decided to really check this out rather then just listening to and relying on the random person in a Facebook group telling me the problem was X or Y.

And I of course did what most people in my situation would do, I went to Google. I typed in the most epic Google search ever for pepper problems, “my peppers are Turing yellow”. To which I received around probably 900,000 results, of which one stared me right in the face! It said this:

”Pepper Plant Leaves are Yellow Due to a Lack of Water and Nutrients. One of the two most common reasons for yellow leaves on a pepper plant is either under watering or a lack of nutrients in the soil.”

Well that came right up in a simple google search…

The solution, or at least a second chance at life!

Well I now realize I fully expected my peppers and tomatoes to be able to grow in some bad conditions with no food or love at all. I feel bad that they were mistreated in this fashion. But i will be attempting to repair the damage I have caused unintentionally.

Our steps to fixing the minor issues to get started with and complete in even just a few hours. Our first major step to tackle was to get the plants into some roomier conditions. I should of done this sooner with both the peppers and the tomatoes. They were really needing it and this was most likely a good chunk of the problem.

Next on our list is the food situation. We know growing plants that will bear fruit in the future need a solid beginning. I realized the plants were killing them selves up-words due to no food being available for new growth.

Of a note, I should mention I did and do still water all my potted plants from the bottom. I have since started doing this due having some mossy, algae type of growth appear. This may have been due to the peat pods. But I’m not sure honestly and will warrant further research.

Now as to the fix for food, I found in my research that a great food for growing peppers and tomatoes ends up being [fish emulision]() coupled with some feedings of magnesium enriched water. This turned out to be a quick, easy and not mention a cheap fix if all goes to plan.

Onward to Wally World for supplies

“it’s best to have an escape plan when entering that store”.

What a wise woman!

All joking aside I found exactly what I was looking for and all for less then $20 in total. I ended up grabbing some 5″ pots to replant the remaining vegetables into. Some of the fish emulsion and a small bag of Epsom salt for our magnesium source.

With all of our supplies we just needed to head home and get everything finished up in a timely manner.

Once getting back home it was time to get everything planted into the new pots. Not to mention time to get some food flowing in. I already had a bag of organic locally sourced potting soil around so that was a big score. So I proceeded to get everything into the new pots. While transplanting, the old pots were removed. I noticed the root balls were pretty much root bound. A lot of the root mass had been air pruning itself and is probably another cause of the dead vegetation.

After getting everything replanted and re-setup in the grow closet a small batch of low strength food was mixed. I also mixed a bit of Epsom salts and water in another bottle for a small session of foliar feeding. This was a new word for me I admit, basically a method for applying liquid fertilizer directly to the leaves.

Good God the stink is rough with this stuff!

Well I of course had to feed to plants a little bit to get the refreshed. Though the locally sourced organic potting mix does contain some food and worm castings. I still decided to ensure a revitalization of the root mass was in order. Figuring if the plants were getting this far gone we might as well try. Also of note, this fish emulsion has a god awful stench about it. I’m very glad this will soon be a outdoor application only. The Epsom salts and water had no smell of course and went on just fine

Where to from here?

Well from here we will continue to monitor the peppers and tomatoes as time goes on. Hopefully in the next few days they will show some signs of new growth and bouncing back. I would like to see a very drastic change from the images show here. I’d also hope to be able to show the improvement very soon. Until that time comes around and we see some results we will just have to unfortunately have to keep waiting. Man I really dislike waiting, but that’s part of the game I guess.