The Best Most Safe Weed Killer: Me 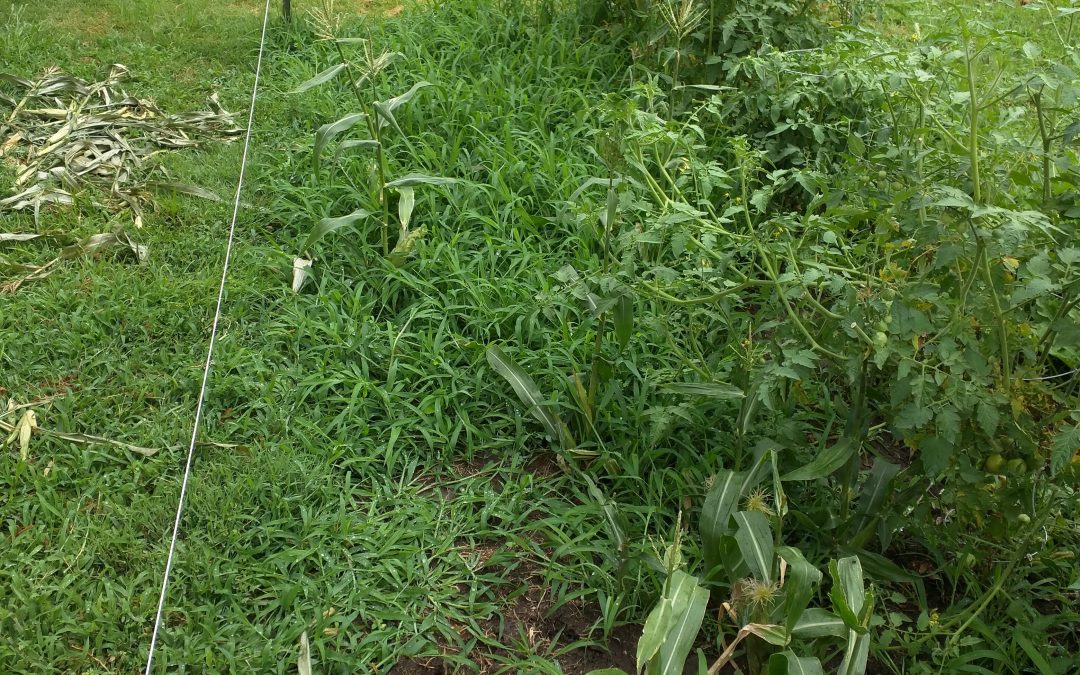 Today I again awoke to some searing back pain which i received from work the other day as i stupidly lifted the laundry from the washer using my back instead of my knees. Well as much as it suck I was hardly able to move from bed as i was super sore, but noticed yesterday if i get to moving around it gets a bit better. So i pulled my sore butt from bed and decided i would try to get to those weeds in the garden as it seems they are choking out the rest of the plants around them. I got dressed for a outside trip and got Chaos all sorts of hyped up for “Going Potty”, and we made our way out to some pretty poor sights as we emerged into the although slight, rain. I decided it best we wait until it stopped to get weeding.

In the mean time since it was raining, i decided a quick trip around to see if anyone had any other vegetables for sale yet, maybe on clearance or looking sad even. I ended up running to Walmart, Menards, Home Depot, and Shopko all of which were either out or had closed down the gardening centers. Although it was almost a wasted trip, i did end up grabbing some pickling salt and some fresh dill from on my way home to be used later on tonight or tomorrow morning for some garlic dill pickles. Val provided the garlic i’ll be using from her own garden, which is awesome and saves on buying from the store. I also ended up nabbing a huge bag of potting sale regularly ~$14 for $5 +tax which was also super cool. With all my running done i decided to get back to the house and finish up the last few things i needed to do and also hang out a bit with Angie before she went to work. 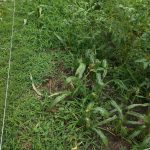 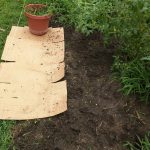 Getting started, not so bad as everything is mud so roots came out nicely. 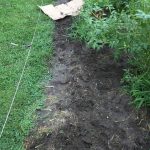 Working my way down 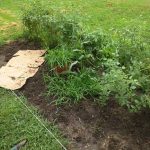 Almost finished on this side of the garden

Once she had to leave for work, i decided it was time to get out there and dig in and get dirty getting these weeds and grass up. I found some cardboard in the garage and opened it up and layed it on the wet grass so i didn’t have to get too damp and got started. I ended up pulling the rest of the corn as it had no kernels, no silk, and a couple were iffy looking at best when upened a bit to peak inside. I worked my way around the garden and ended up getting most all the grass from around the tomatoes, peppers, and watermelon. But ended up wearing myself out before i could finish the picking of the ever fast growing weeds. I think it turned out pretty good, and should be ready to plant some stuff for a fall harvest. As to what those are, i’m still working that part out and should have it nailed down and planted soon. With all the care and weeding, i find myself wishing there were more hours in the day sometimes. 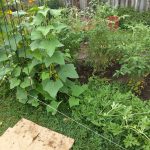 The cucumbers are growing quite good 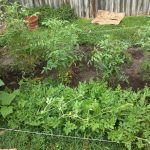 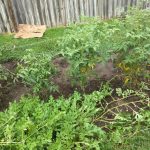 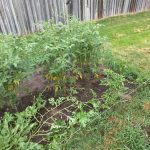 The end finally comes, for now anyways. You can also see the Serrano plant as well as the poor jalapenos in the back near the yard. Also found the two onions over here! 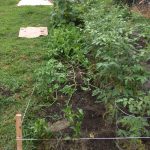 Looks a lot better without all that grass in there sucking up nutrients from the veggies! 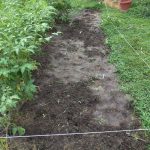 This part wore me out, i was sweating by the time i was done and just above the wrist in caked on mud. 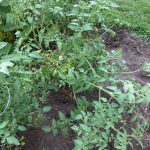 That cherry tomato plant i picked up from work one day really got big! This is like a whole other plant growing out of the cage!!

Finally found a tomato on the beef steak plant, tiny but it was hidden in there just had to prune some of those leave out of there.

That’s all for now, but be on the lookout for the pickling when that happens, and here’s to hoping they turn out awesome!